Minamoto Yoritomo who was the first Samurai Shogun of Japan had founded the Kamakura Shogunate in the 12th century in Kamakura area.
In the middle of 12th century, two great clans had become powerful to control politics and support the Imperial court. The two clans were Heike and Genji.
Taira Kiyomori who was the top of Samurai in Heian era (794 – 1185) had established the base of Samurai world in Japan.
After his death, Minamoto Yoriitomo had decided to fight and destroy Heike and finally he won the war.

As such, the original culture of Samurai, natural features as fishing and farming village and fashionable atmosphere which people created are combined that has created unique town Kamakura.
At present, Kamakura is one of the representative tour spots in Japan where many surfers, sea bathers and tourists from all over the world.

1) The place where you can experience:
(Tsurugaoka Hachiman Shrine to feel magnificent and traditional architecture)*
Tsuruoka Hachiman Shrine deify the Shogun of Kamakura which was originally established in 1063 by Yoritomo’s grandfather.
Dankazura:
Yoritomo constructed a pilgrimage route in 1180 from the shrine toward Yuigahama beach to pray safe childbirth for his wife. The name of the route is Dankazura which is 500 meters long. This is a beautiful avenue of Cherry blossom tunnel as more than 300 cherry trees in springtime.

Genpei pond and Taikobashi-bridge:
This pond located just after going through the third shrine gate was made by order of Yoritomo.
This pond is called “Genpei pond”. It is separated by a bridge called “Taikobashi-bridge”.
The pond on the right is called “Gen” which stand for the Mnamoto. The pond on the left is called “Pei” which stand for the Taira. The pond of Pei was constructed with death image and that of Gen with the image of prosperity.

Maiden(The Lower Worship Hall）:
This building is to pray the main shrine from under the stone steps.

Wakamiya(The secondary Shrine):
This building is the style of Shinto architecture in which the main hall, Heiden (hall of offering) and worship hall share one roof, and are connected via an intermediate passageway which was restored in 1624 by Tokugawa 2nd shogunate, Hidetada.

Hongu(The Main Shrine）:
This building was constructed in 1828 by Tokugawa 11th Shogunate, Ienari whose style is Edo architecture. The entire building inside and outside is rich colored and various gorgeous sculpture are set there.

2) The place where you can enjoy:
(Kamakura station building):
The building has gable roof with the design as long flat house designed and built in 2017 by East Japan Railway company and Yokohama station building.
The depth of eaves overhanging the entire roof is the main characteristic
The interior is designed as Japanese atmosphere using open ceiling space made by woods.
This building is two floors above the ground and designed as the concept of simple and strong characteristic by excluding ornaments. 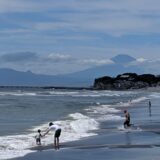